Guys, a super exciting thing happened to me the other day: the lovely people from Beautiful Feet Books contacted me (on Instagram, follow them, and me - @bibliobites) and asked if I would like to review their newly released picture book, Anno's China. This makes me feel like I'm some big time blogger or reviewer, instead of some little old nobody SAHM who is doing this for the first time! But shh! Don't tell them that I don't know what I am doing, and maybe they will send me more books! 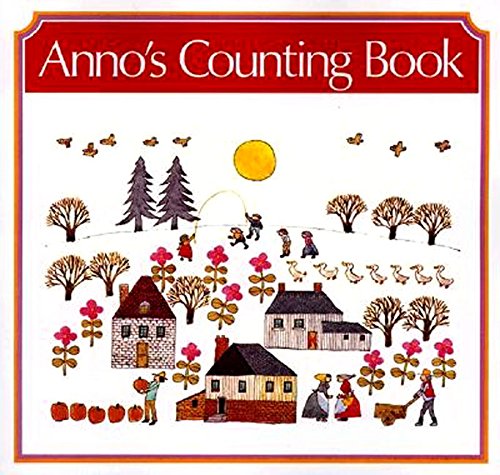 I was introduced to Mitsumasa Anno some years ago by MommaofMany who was appalled - appalled, I say - to find that I was not familiar with his work. I have obviously learned better since then, and am now the happy owner of Anno's Counting Book (part of my preschool curric, more on that later!), Anno's USA, Anno's Italy. Anno's Magic Seeds, and Anno's Medieval World, besides China. While the "geography" or country books are my favorites, I think Anno's China is fast becoming my new favorite, and I will tell you why. 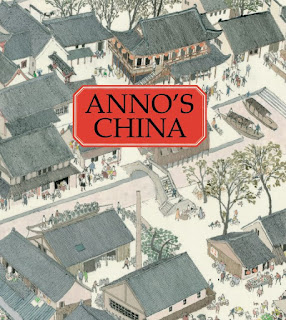 First, I will say that I was almost disappointed when I pulled this book out of the envelope, because although it was a hardcover with crisp new dust jacket, it seemed to me that everything seemed a bit fuzzy, like when my home printer needs to be aligned. China did not look the same as the other books I owned. And I was surprised, because I actually own an abundance of  publications by Beautiful Feet Books and have never felt their quality to be lacking before. Then I remembered that the illustrations were SUPPOSED to be watercolors, which OF COURSE have a fuzzy, ethereal quality to them, by virtue of the media. Which made me wonder why Anno's other books, by other publishers look like they were illustrated in children's markers. I am not here to run anyone else down, all the books are lovely, but - this one by BF books may be a more accurate representation of the artist's original intentions.

But enough about that, here's the real reason why I love this book so much, are your ready for this? It has an index or appendix explaining what you're seeing in each scene! I know, right? But maybe you're not familiar with Anno's books, and if so, let me explain.

Anno's country books are wordless picture books, wherein Anno (always dressed in blue, with a pointy cap) journeys across a geographic area such as the Italy or the United States, and sometimes across time. There's an amazing amount of detail, but sometimes, unless you know what you're looking at, you don't know what you're seeing.

When I first pulled this book out of my mailbox, I thought, let me sit down an look at it real quick. Oh boy. You'd think I would have known better, right? There is no "quick look" with Anno's books. As soon as I opened it, I was drawn in- the beginning scenes were so calm and peaceful and I recognized men fishing with cormorants, like we'd learned about in Ping! But soon I began to feel a little frustrated. I could recognize that the author was taking us up river, but I wondered if this was a famous village I was supposed to recognize? What were those people doing? What did *that* mean? I simply did not know enough about Chinese culture and traditions to appreciate all that this book contained. 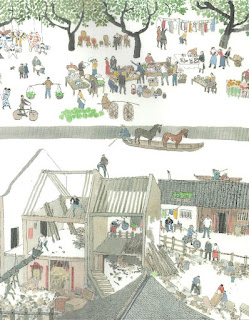 But then, THEN, my friends - I found the index. The lovely, 9 page index, PLUS an author's note, that carefully explained each scene, without becoming tedious, and still leaving much for the reader to discover on their own. This is the ONLY one of my Anno books that has this feature, which leads me to believe it is something that Beautiful Feet put together, or included, though it is written from the author's point of view; and it is, in my opinion, what makes this book amazing instead of only great, and definitely worth having. When I'm finally finished oogling it, my next step is going to be to figure out where I can fit it in to my curriculum...

*As aforementioned, I received a complimentary copy of this book in exchange for my honest review. I have received no other compensation. Links to Amazon are not affiliate links, I receive no monies for recommending good books to y'all, I just like to see people reading. ;)
Posted by Bibliophile at 6:51 PM

Bibliophile
I'm a book-collecting, avid-reading, homeschooling Mama to seven. This is my place to talk about all things book related.